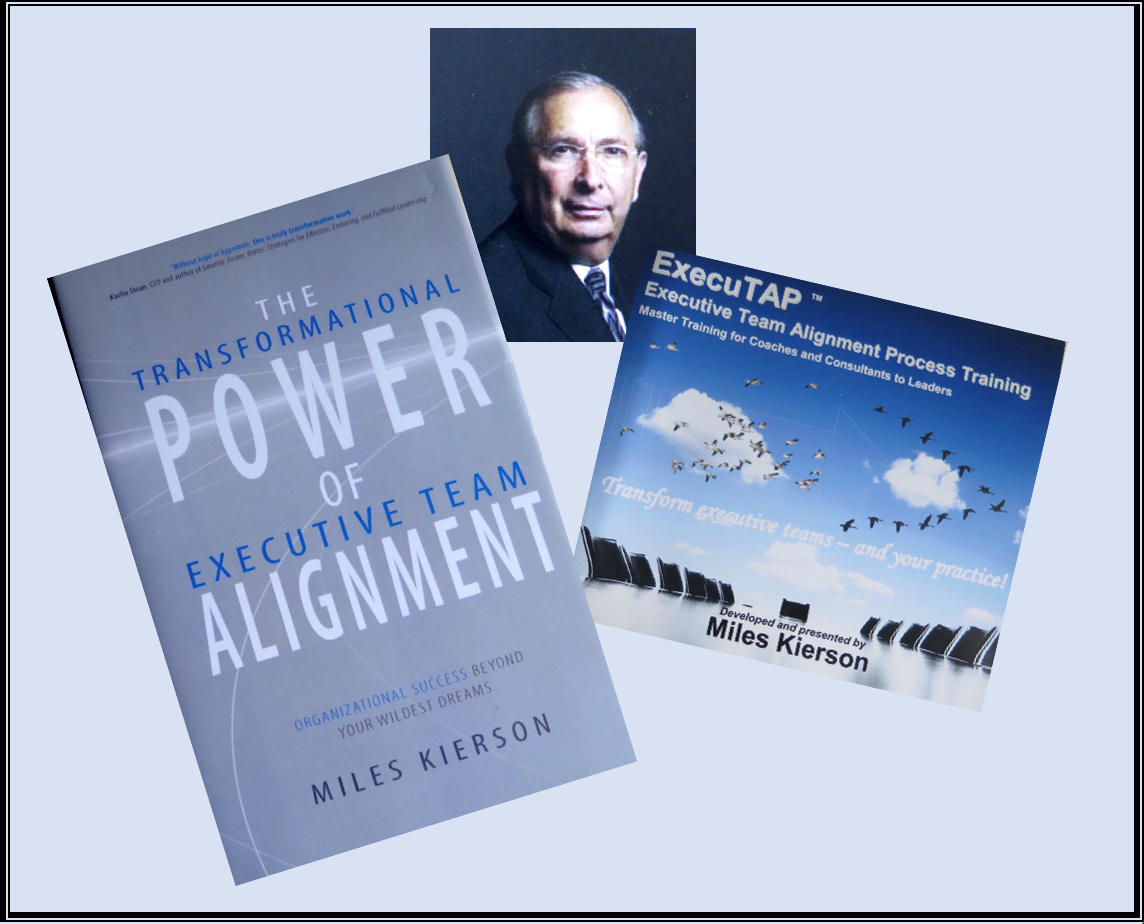 I’ve had the privilege to train with several influential teachers and practitioners of leadership, executive learning and development. In particular I’m grateful to Miles Kierson who created ExecuTap™ a process to align executive teams for success. I was in conversation with Miles about my Primer on Self Awareness and he commented that in order to create self awareness we first need to be present. Further he shared that leaders require the abilities of awareness, alignment and focus for organisational success. Miles wrote an article on these abilities and has allowed me to reprint it below.

THE THREE ABILITIES OF AN AWAKENING LEADERSHIP by Miles Kierson

Einstein has been quoted as saying that “Everything should be made as simple as possible, but not simpler”, and I have been gifted with the ability to reduce things to their simplest. I say gifted with the ability because it is not something that I purposely developed or strived for or even would have known to have as a goal. On the plus side, I sometimes can give a different and clearer view of an apparently thorny issue; on the negative side, sometimes people will hear what I have to say and it seems so obvious to them when they hear it that they say, “I already knew that.” I usually want to ask them, “Yes, yes, but did you know that you knew that?”

I wrote that first paragraph in order to establish at the outset that you probably already knew what I have written here about leadership, but perhaps you have not seen it organized the way I have done it, and perhaps you will see something in a new way. It is a challenging task, saying something about leadership that is new or different, as there are tens of thousands of books written on the subject and who knows how many articles.

Let me introduce what I call practical definitions, which in my lexicon means definitions that are useful in a particular context. A leader, at least in the context of organizations, is someone who can be counted on to create the future. What this means is that a leader interacts with his or her everyday life – the events, the circumstances – in a way that furthers or intends to further the movement in the direction that the entity which they are leading is going. In other words, whatever occurs, the leader uses it to move forward. It requires an awareness: an awareness in the present of what the future is that the entity has declared they are moving toward, as well as an awareness of the present – what is occurring, what thoughts he is having, and especially what he is saying. Those in a position of leadership have tremendous impact on the people around them, an impact caused by what they do, what they say, and even what they think. The leader has a moment-by-moment responsibility for the impact he is having, and this requires an acute awareness of external reality and his responses to it. In any given moment, he can either be furthering or hindering the enterprise’s possibility of success toward the future to which it aspires. Said another way, in any given moment he is either forwarding the vision or perpetuating the status quo.

So the first ability of a leader must be her ability to be aware. To be aware means to be awake, and most of us are asleep most of the time. In our habitual way of being, we are lost in our thoughts, in our emotions, in our evaluations about reality, in our fears. We are asleep to life! It is the old “stop to smell the roses” notion taken a step or two further. We are missing life, it is passing us by, but we are asleep to it. We think we are awake and then we suspect there is something we are missing but we cannot seem to be able to quite figure out what it is.

The leader, though, must be awake, as I have expressed. She must be awake enough to be able to see what is going on in her world and inside of her, and enough to then to be able to choose the future that she sees is possible. To be awake is not an absolute state, it is an unfolding, and so I am using the term Awakening Leadership to describe it, not awakened leadership. For a person to be an effective leader, then, they must be willing to be awake and awakening.

I had organized and was facilitating a two-day session with a client executive team, with the objective of their creating and aligning on a vision. The CEO came in at the starting time and announced that his father had passed away the night before, that he was going to the funeral and to take care of family matters, and that the session should go on without him and he would be committed and aligned to whatever they came up with. He left; we continued. When he returned the following week, he completely owned the vision that his team had articulated and became a brilliant and tenacious spokesperson for that vision, which, in fact, led to extraordinary success for that company. A great leader? You bet.

The second ability of a leader is to gain the alignment of the people around him. I am using the word alignment rather than the term buying in purposely. Alignment, in my practical definition of it, means ownership, which is more encompassing than just buying in. You own your house; you might buy into a vacation condo. It is obvious which one requires more of your commitment. As a leader, you do not want yes-persons or part-time owners; you do want people who are completely committed, as you are, to the fulfillment of wherever you say you are going as a company. To gain real alignment is a tricky accomplishment in most organizations: it takes authentic dialogue, straight talk, and trust. Tricky, but not impossible, and certainly worth the effort. Effective leaders will do what they need to do to gain it.

The third ability of a leader is to ensure that the organization has the intent, the resources, the structures, and the general wherewithal to be successful in its journey to the fulfillment of the vision. There are many aspects of this that need to be taken into account, and obviously the leader cannot do it all. He needs the energy and the willingness and the dedication of all management as well as the rest of the employees. Most importantly, he needs to be able to enable and ensure that the organization is equipped to focus on what needs to happen to be successful. For effective implementation, focus is everything.

As a summary, the leader is someone who is continuously creating the desired future: moment-by- moment making the choices to act in accordance with creating that future. She needs to be willing to be awake and awakening. She needs to gain the alignment of the people around her. And she needs to ensure that the organization can sustain focus over time.

Miles Kierson is the author of  The Transformational Power of Executive Team Alignment: Organizational Success Beyond Your Wildest Dreams (2009) and Seven Provocations – A Novel About One Man’s Spiritual Awakening (2011). He also co-authored Discovering Execution: The Key to High Performance Organizations (2016).   To learn more about Miles see his LinkedIn and Amazon profiles.